The command line is analyzed by the command interpreter. Spaces separate the words of the commands and the arguments. Get into the habit of typing these spaces, some versions of DOS tolerate the absence of certain spaces, others do not. If you get into the habit of not typing these spaces, you risk, by changing the machine, of not being able to execute a command which, however, you are used to seeing working elsewhere. With windows 10 cmd you can now come up with the best choices.

The VER command is used to request the version of the operating system. It requires no argument. 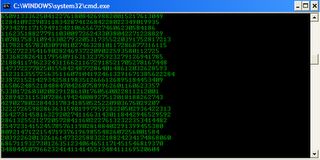 The Edit Chap1.txt command launches the Edit program which comes with DOS. The argument of the command is the name of the text file to be edited.

The COPY command is used here with two arguments. One indicates the source file the second indicates the name the copy should take.

The Time command is used in this example with the / t option which for this command means that we do not want to modify the time but simply display it.

Please note that the same option letter (here / t) may have a different meaning from one order to another.

The command interpreter is a program called COMMAND.COM if you work with a DOS version or with Windows 9x. Later versions of Windows contain a second CMD.EXE interpreter whose commands have been revisited. Some commands have appeared or disappeared from one version to another. Thus the HELP command disappeared in Windows 98 but is available again with later versions.

The CMD.EXE command interpreter accepts the same commands as the COMMAND.COM interpreter but allows a greater variety of options for each of them. These new potentials are called command extensions. Thanks to them, manipulations of variables are easier and the writing of command files is a little less off-putting.

Under Windows, there are a large number of programs that do not use graphical interfaces. However, these programs are often very useful when using the operating system this is where the CMD command prompt comes in. Like the MS-DOS Command.com shell, CMD is an interface that allows direct communication between the user and the operating system. It makes it possible to execute various programs on the command line by offering the possibility of passing parameters appropriate to each execution of a program.